Into the Wilds – West Kalimantan

Sitting on a woven mat, I listened as a Dayak Simpang elder explained, “Our history and our story are told through the old songs.”

I was in Ketapang Regency, around four hours from Pontianak, the gateway city to West Kalimantan. I sat captivated as he continued, “We moved a long time ago from our original place, Tanah Rawang in Sukadana. We hail from the Sukadana Kingdom, however, with the spread of Islam around the 13th century, we moved for security reasons. We now live in modern houses, but our original village was located in the jungle, where we lived close to nature. We will go there tomorrow and sleep one night in the forest, so we can show you our old ways, like how we forage for forest food. We will only take rice and coffee with us.” 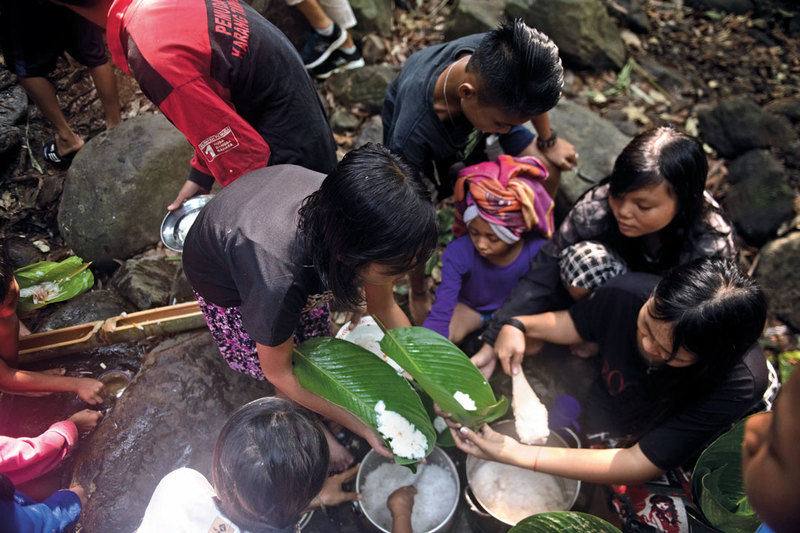 I was very excited to hear his plans. For a long time, I had heard about the Dayak tribes’ close connection with nature and about their intricate knowledge of forest food.

We set out the next morning with only a small backpack. I was surprised when, after only an hour, we came upon our forest camp. It consisted of a clearing and a sturdy raised bamboo platform with a secure woven palm leaf roof. I was even more surprised when I found out the platform had just been constructed the day before. 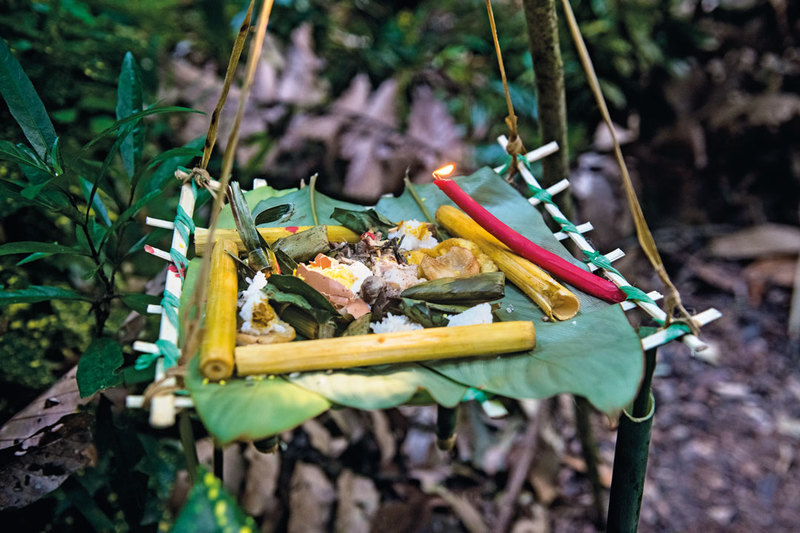 A series of six bamboo pipes had also been meticulously rigged up, stretching all the way from the top of a waterfall. These delivered fresh, pure mountain water right to our camping area. We were happy to jump under the water for a forest shower after our trek, and drank fresh water from the pipes throughout our stay.

I was with a small group of travellers. We hailed from the USA, Malaysia, Australia, Germany and New Zealand. Dessy, a 23-year-old Dayak Simpang woman, was our guide. She provided a running commentary during the trek, explaining the properties of each medicinal plant we passed along the way. She also pointed out small bitter fruits and larger sweeter fruits, plus edible flowers. As we passed some large durian trees, she informed us that some were as old as 300 years. After our arrival at the camp, Dessy instructed us to split into five small groups so we could be paired with our local leaders. Our leaders were very enthusiastic Sekolah Adat (local customary traditional school) kids, whose ages ranged from seven to thirteen years.

Dessy instructed, “The children will show you the way. They can teach you how to forage for forest food and gather edible flowers, ferns and plants. Then they can show you how to light a fire and they will cook for you”. 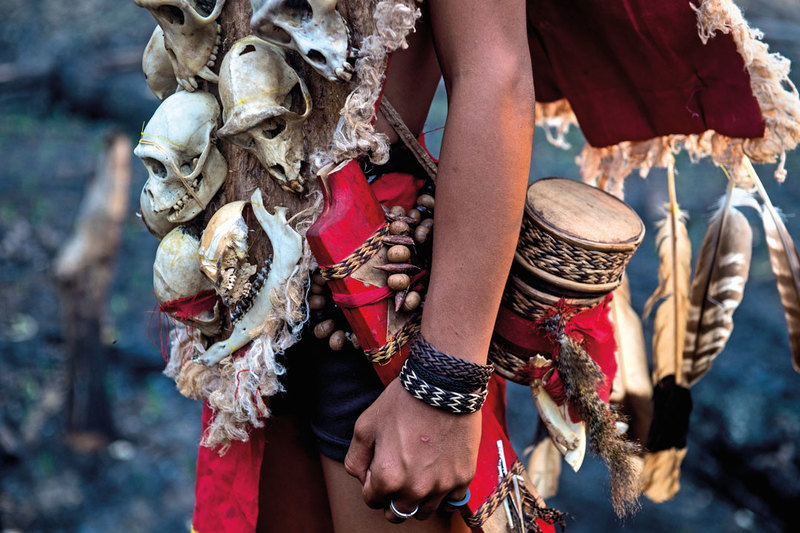 With that, we took off in different directions to collect our dinner. We had no pots or pans, or any cooking utensils, just a mandau (a traditional swordof the Dayaktribes of Borneo used as a machete). In no time, however, we had gathered our forest food and the fire was lit and we were steaming forest flowers with young bamboo shoots and jungle ferns, plus wild sweet potato leaves, the ingredients for our soup, in long bamboo tubes that the kids cut from the forest. They had taken a lot of care to choose the right tube, checking for leaks.

As the rice steamed in bamboo tubes over the fire, the kids got busy cutting more tubes to use as coffee cups. Only after completing that task did they actually start to skylark around and play.

I have never seen such a polite and courteous group of children as our young jungle guides. They were amazingly adept at everything they applied themselves to. What was really surprising was that there was no evident adult supervision. It was all quite remarkable.

Soon enough, we were invited to attend a ritual in the forest with the village elders. It took place beside an old wooden altar which marked the spot of the original village, not far from our clearing. “We must give thanks and ask for permission from our ancestors to be here in the forest”, said one of the elders. Offerings were made and placed on a small hanging tray. These included rice, bamboo, a chicken and tuak (local rice wine). The elders called in the spirits using their lyrical ancient language, and proceeded to chant. Our Dayak hosts were so inclusive and made sure we were involved in all the forest activities, including this ritual. We felt so privileged to be part of it. 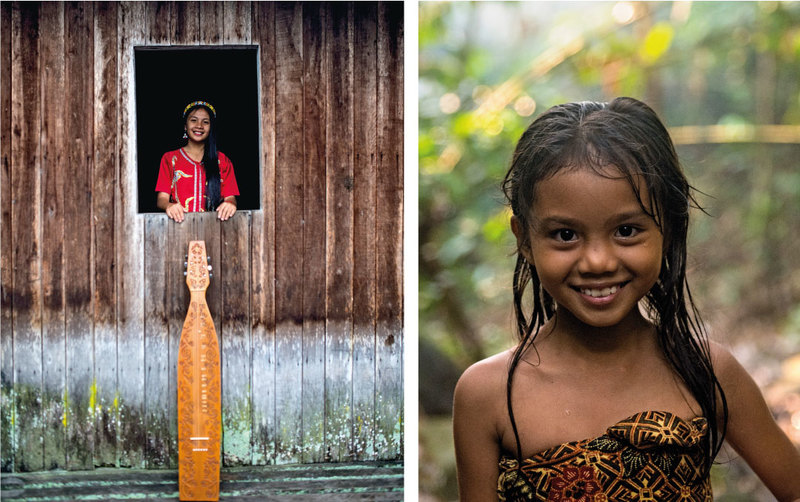 Soon enough, the Sape, the traditional Dayak guitar, came out and the kids gathered around Dessy and her sister Delly. They proceeded to play and sing the sweetest songs ever. After an hour or so, I discovered they had hauled a huge speaker up the trail. In a flash, the Sape was plugged in and the music amplified through the forest.

Shortly after the gentle Sape music, there was a switch to full-on pop music, which blasted out at high volume. A few quite impressive solo artists came forward, microphone in hand and enthusiastically belted out some well-known Indonesian pop tunes.

The dancing and jigging around went on for a while, before we switched back to the lyrical Sape again. I heard some rustling in the trees and then a talented dancer appeared and bewitched us all with his very pronounced yet graceful moves. He would hold a pose for a long time, gazing up before returning to very accentuated movements, similar to those of a bird. To see a traditional Dayak dancer against the pristine forest backdrop carried away by ancient Sape melodies was indeed spellbinding.

As evening fell, we bunked in together. Somehow our group, which comprised around thirty people, seemed to fit perfectly on the sleeping platform. The kids slept beside us. After turning in for an early night, I awoke at around 1am and heard an elder intoning a beautiful song next to me. He was singing to the children, who had started up a post-midnight chat session. This simple remedy, singing an old song, lulled them all back to a peaceful sleep.

In the morning our campsite was a hive of activity. Bubur (Indonesian porridge) was for breakfast. I had never seen trees used in so many ways before! Boat-shaped bowls fashioned from large leaves were made in no time, with two small forest toothpicks securing each end.

Wooden tongs and chopsticks appeared. Leaf spoons and a wooden stirrer were all laid out ready to use. Several bamboo cookers bubbled and steamed away. Crowding around our fabulous bamboo pipe shower, the kids lathered each other up with a leaf which, I had learned the day before, produced a natural soap!

After breakfast, we took an excursion to an old honey tree, where we could see a drooping wild honey nest in the top branches. Dessy’s grandfather still hunts honey in the forest, and there is only one way to get it. You make a series of little ladder rungs on the tree trunk and scale it. But first, there must be ritual, which takes the form of a song, a song to the Queen Bee. This is to seek permission to take the honey and to give thanks. Dessy’s grandfather explained the honey gathering is done around 2am when the bees are asleep and quite dozy. This is how wild Borneo honey is collected. It’s then bottled and sold locally.

Not only were our little hosts resourceful, but they were also affectionate and so eager to please. We were all smitten by these Sekolah Adat kids. The children attend a volunteer-led after-school programme which connects the elders with the young ones and incorporates traditional games and cultural lessons. They share adat ways, singing traditional songs and learn traditional Dayak dances. There are now 36 Sekolah Adat schools in villages across Indonesia. Many are set up by AMAN (Aliansi Masyarakat Adat Nusantara or Indigenous People’s Alliance of the Archipelago).

Venturing into West Kalimantan and travelling to its remote corners, where you can truly absorb the culture of the Dayak Simpang, was a remarkable experience. I felt indeed honoured to meet this tribe, and especially to be able to engage with the kids who are the next teachers and the caretakers of the rainforest.